"I disagree..." she was known for using those words at the start of most of her sentences. Her son Larry called her a "force of nature" and he goes on to say that after an argument, she would say, "Larry, I would agree with you, but then we’d both be wrong'” The creative force of nature behind the Albert Nipon label was actually Albert's wife, Pearl. Used With Permission from the Jewish Exponent

Born in Philadelphia, Pearl got her start in the business when she opened a women’s dress shop with her sister, Dorothy when she was only 19 years old. She married Albert Nipon in 1953 and started designing maternity clothes when she was pregnant and couldn't find anything that she herself wanted to wear. Under the label Ma Mère, she designed an innovative maternity clothing line including the first one piece maternity dress. That company eventually had 100 stores across the US. 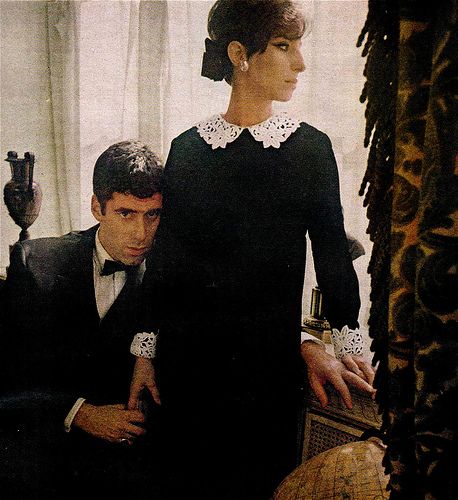 In 1972, after taking of time to raise her children, Pearl went back into the fashion business. During that time, pantsuits and separates were all the rage so people thought she was crazy when she said she wanted to design dresses. But Pearl understood that women didn't want to feel that wearing pants was a requirement to compete with men in business. Her hunch about dresses paid off and hers were soon sold at Saks Fifth Avenue, I. Magnin, Neiman Marcus, Bonwit Teller, Sakowitz and Lord & Taylor. Because Katie and I value sustainability, uniqueness and quality, we have been gathering Albert Nipon dresses for several years now.  We re-discovered these hidden gems because, first of all, we instantly fell in love with them, and secondly, we appreciated the attention to detail and unique design elements that made them stand out! We have seen the quality of both fabrics and craftsmanship quickly disappearing in the fashion world and have made it our goal to add beautiful vintage dresses like these to our collection whenever possible. The early Nipon dresses were mostly made of natural fibers including cotton and silk in gorgeous prints. We are so happy that these dresses have once again become relevant. We knew that one day people would appreciate pretty dresses that were not only beautiful, but well made. Pearl Nipon's designs, though feminine, presented a revolutionary strength.  She said she was most inspired by the American designer Claire McCardell. She admired McCardell's originality and creativity. Pearl's designs included dainty elements but they weren't too frilly or silly, and hers became the go to dresses for busy women of the 1970's and 1980's. The brilliant Albert Nipon print ad campaign "And the Albert Nipons were there" featured Albert and Pearl among celebrities, sports stars etc. See if you can spot Pearl and Albert! March 1978 edition of Ambiance magazine from our personal collection

Even though the label bore his name, Pearl, was in no way just a shadow of her husband. She had a reputation for getting things done and for inspiring others to do the same. She considered strong willed and was known as the "white tornado," because of her non stop energy. This is an early 1980's press photo of Albert and Pearl in our collection.

"We are a very democratic company. We run by committee .. and Pearl is a committee of one." Albert Nipon Pearl was not afraid to use sheer and semi sheer fabrics in her summer dresses including cotton voiles and luxurious silks. When asked about future trends, Pearl replied, "I don't think that anyone can dictate to women." Pearl Nipon wanted her designs to be timeless and never be considered obsolete. She would design a new collection with a slightly modern twist for every season, but her pieces were created to be worn for many years. Even the Nipon Boutique label dresses like the one shown here, though made from higher quality synthetic fibers at a more affordable price point, are incredibly well made. Pearl died in 2018 at the age of 90. We think she would be happy to see that those beautiful dresses she designed 40-50 years ago are being scooped up once again. Once you've worn one, you too will become an Albert Nipon dress fan and we think you will happily join us in saying;
Thank you Pearl!

(We credit photographers whenever they are known. Please request removal and we will happily comply if there is a copyright issue).

Albert and Pearl Nipon interview by Barbaralee Diamonstein-Spielvogel,  Inside Fashion, 1984